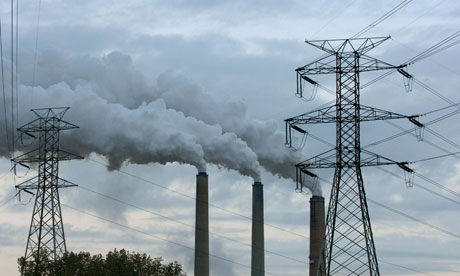 Any fossil fuel infrastructure built in the next five years will cause irreversible climate change, according to the IEA. Photograph: Rex Features

A new report, released yesterday by the International Energy Agency provides a stark reminder of the urgency of the climate crisis – we have 5 years to avoid irreversible, run-away climate change that will lock us into a scenario where it will be impossible to keep global average temperature increases under 2 degrees.  This article in the Guardianstates:

The world is likely to build so many fossil-fuelled power stations, energy-guzzling factories and inefficient buildings in the next five years that it will become impossible to hold global warming to safe levels, and the last chance of combating dangerous climate change will be “lost for ever”, according to the most thorough analysis yet of world energy infrastructure.

Anything built from now on that produces carbon will do so for decades, and this “lock-in” effect will be the single factor most likely to produce irreversible climate change, the world’s foremost authority on energy economics has found. If this is not rapidly changed within the next five years, the results are likely to be disastrous.

Colleges and universities have been increasingly aware of this “lock-in” effect as they plan and manage their campuses.  Signatories of the ACUPCC have forced themselves to address this reality by imposing the goal of net-zero emissions on themselves — raising tough questions in planning and development meetings like “do we really need this building?”

This type of thinking is now necessary for all types of organizations — but it is particularly important for colleges and universities as our primary institutions for creating new knowledge and educating so many of our leaders and professionals in every industry.  How campuses are designed, built and managed has a profound impact on students — as do the conversations and ways of thinking that administrators bring to the community.

Today’s graduates need to be prepared to hit the ground running in terms of creating the low-carbon solutions — not only low-carbon buildings, factories, and power plants, but also economic indicators, product design, policies, cultural norms, city planning, new technologies, and other strategies that transform the ways we go about meeting our needs and leading healthy, prosperous, fulfilling lives.

This report puts a finer point on what we know – we must face up to the physical reality of serious constraints on carbon emissions and take serious action now:

Yet, despite intensifying warnings from scientists over the past two decades, the new infrastructure even now being built is constructed along the same lines as the old, which means that there is a “lock-in” effect – high-carbon infrastructure built today or in the next five years will contribute as much to the stock of emissions in the atmosphere as previous generations.

The “lock-in” effect is the single most important factor increasing the danger of runaway climate change, according to the IEA in its annual World Energy Outlook, published on Wednesday.

This week, Australia took an important step in helping the world move in that direction by passing a law to put a price on carbon.  Many voluntary efforts in the US are working in this direction, with efforts in higher education among the leaders. Luckily, imposing these constraints can drive innovation, open up ways to re-think well-being, and create a real, fundamental economic recovery based on real value.